This is a case study from several years ago, but it was so striking at the time, and is so relevant now, that it bears repeating:

A good friend of mine, of the most spiritual ladies I know,  has some serious health issues, including a crumbling spine and constant pain in her chest. Unbeknown to me, she had decided to take herself off her long-term, heavy pain-killing medication a couple of days before I arrived, so she was not in the best of shape when I arrived.

We agreed that I would work with her with hypnotherapy to control her considerable pain. No sooner had she gone into a beautiful deep state of relaxation than she began talking:
“The mud is everywhere, they never told me it would be like this, where are my men . . . .?” At first I thought that she had slipped into a past life, but it quickly became clear that I was talking to someone in the trenches in Belgium in World War I. This young soldier, who gave his name as Commander George, was only in his mid-twenties, and felt desperately unprepared for the carnage all round him. His men were being killed, they were all knee-high in mud all the time, the stench of gas hung in the air and he was very frightened and confused. 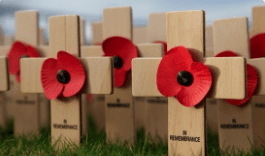 While talking to Commander George, he suddenly said, “I’ve been hit. The bits of metal . . . I’m on the operating table, I see the doctors, they’re taking bits of metal out of my body but it’s no good . . . oh lord, I’m dead, aren’t I?” Having established that yes, he was indeed dead, I explained that he needed to move to the light, where he belonged. He was adamant that he was not going without his men, who were clearly there with him somewhere. While emphasising how well he had done his duty and praising his bravery, I told him he had to order his men to go to the light too. I invited him to see the pathway, to feel the love and the warmth, and to tell his troops to make their way to the light. Only when they had gone did he agree to go too. As he got closer to the light, he said, “oh my, there’s my mother! There’s my dog!”

When my friend came back from that deep state of relaxation, she was as surprised as I was. She said that she felt Commander George, frightened as he was, scamper like a crab from her chest to her left arm, and it was from there that he went to the light. The troops – she said she counted at least eleven of them – were piled up her spine, and left via the base of her spine down a sort of chute. Touchingly, she said that Commander George’s dog was called Shep, something that she just “knew” but which he had not told me.

The next day my friend told me that, for the first time in ten years, she did not have a pain in her chest, and she could breathe normally. A couple of weeks later she emailed me to say she had had to completely re-learn how to sit in her car because her spine was so much stronger and her posture was improving day by day. More recently she drove to see me, a journey of almost three hours, something that would have been impossible before the session. She got out of the car and bounded around like a spring lamb – I could not believe it was the same person.

As she herself said, if she had gone to a conventional hypnotherapist and Commander George had appeared, the therapist may well not have recognised what was happening or how to deal with the situation. But then, we agreed, Commander George only appeared because he knew that he and his troops were in a safe, secure environment in which to make that all-important journey.

That is spirit release work at its very best, and it was a pleasure and a privilege to facilitate that healing.

If you feel that you, or someone you know, might benefit from some past life work, please get in touch. Call me on 07597 020 512 or email me on:
judy@effective-hypnotherapy.co.uk .
I’m always happy to have a chat, totally free and totally confidential.
I work from Vinings Natural Health Centre in Haywards Heath, West Sussex, and from The Practice Rooms in Hove, East Sussex.